Announcing the 2020 Fund 4 the Frontlines grantees! 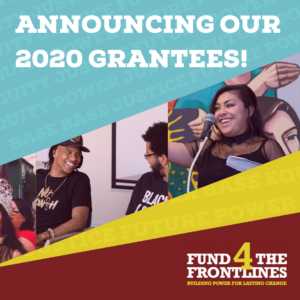 In 2018 Social Justice Fund NW launched the initial phase of Fund 4 the Frontlines, an ambitious major gifts campaign with a singular focus: to level-up our region’s grassroots organizing by resourcing powerful, long term base building for people working at the frontlines of struggle. By January of this year we had raised enough towards our $4 million goal to make a first round of base building grants, setting the stage for the public launch of Fund 4 the Frontlines later this year.

These are tumultuous times. In the last half decade, our communities have endured the rise of the far-right to the highest seat in the country, emboldened racism and xenophobia, new depths of income inequality, advancing climate change, and now, a global pandemic. Through it all, the single greatest factor of our resilience has been community organizing — people most impacted caring for one another, advancing revolutionary change, and never conceding the fight. The best way to ensure that this vital work continues beyond times of crisis is through funding base building.

For the last four months the Fund 4 the Frontlines grantmaking committee — an amazing, intergenerational group of BIPOC women and femmes representing SJF grantees, Giving Project alums, and other community organizers — participated in a democratic grantmaking process. As the impacts of COVID-19 developed in the background, they met for long hours on weekends, committing themselves to powerful conversations and relationship building with potential grantees before arriving at their final decision. The significance of their leadership during this pandemic can’t be overstated.

It is with enormous joy that we announce the first six Fund 4 the Frontlines grantees. Each of these organizations will receive a $250,000 grant ($50,000 per year for five years) to grow the breadth and depth of their work. Each one is rooted in and led by the communities they serve. Each one is committed to building collective power, expanding their base, developing new leaders, and planning for transformational, long term change. Congratulations to our 2020 Fund 4 the Frontlines grantees!

Imagine Black (formerly known as Portland African American Leadership Forum) helps Black community imagine the alternatives they deserve and builds their civic participation and leadership to achieve those alternatives. They envision a world where people of African descent enjoy the rights, resources, and recognition to be a thriving, resilient, and connected community.

WA-BLOC seeks to transform culture and space at Rainier Beach High School (RBHS) and in South Seattle by building intergenerational place-based leaders of change to disrupt educationally embedded systemic racism for the purpose of dismantling the school to prison pipeline.

Washington Immigrant Solidarity Network (WAISN) | Burien, WA
WAISN is a grassroots coalition made up of nearly 100 immigrant and refugee rights organizations and individuals in Washington. WAISN’s mission is to protect and empower communities by providing support, capacity and resources to build power and a united voice in Washington, establishing tools to resist anti-immigrant and anti-refugee activities, and galvanizing communities for mobilization and collective action.