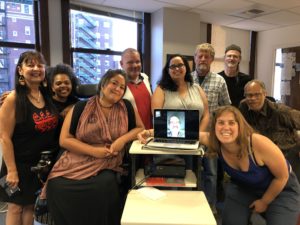 Social Justice Fund Northwest is proud to announce the second round of grants from the Displaced Tenants Fund, a partnership between the Displaced Tenants for Accountability & Transparency (DTAT) and SJF. In September, 2019 the Fund granted over $2.4 million to six organizations working to increase high quality, affordable, accessible, environmentally sustainable, and community-controlled housing for low-income tenants in Seattle.  See below for a history of how the Fund came to be.

The Displaced Tenants Fund grantmaking committee consisted of 11 volunteers – almost all of whom identify as renters and tenants who are directly impacted by displacement and lack of housing affordability. Over the course of 4 months in the spring and summer of 2019 they built their analysis about housing justice and the affordable housing development process, read 15 grant applications, and selected and attended 8 site visits.  Ultimately they made 6 grants totaling $2.4 million.

Founded by low-income tenants and neighbors in 1976, the Cascade Shelter Project (CSP) is a member-led cooperative dedicated to sustaining truly affordable housing in the heart of Seattle’s Cascade neighborhood in South Lake Union. Tenants at Cascade Shelter Project serve as board members, fulfilling the practices and responsibilities of owners for the duration that they live at Cascade. Tenants receive affordable rents (all 12 units at Cascade are affordable to those making 0-45% AMI) in exchange for sweat equity and cooperative management responsibilities. Funding from the Displaced Tenants Fund will support much needed capital improvements (maintenance and structural repairs) to steward three, adjoined buildings that are over 100 years old.

Founded in 1970, Chief Seattle Club’s mission is to provide a sacred space to nurture, affirm, and renew the spirit of Urban Native Peoples. Funding from the Displaced Tenants Fund will support the construction the new ?al?al Building (?al?al means home in Lushootseed) which will create 80 affordable studios on seven floors with 60 units designated for homeless households and 10 units for veterans. In particular, this grant will support construction of the community facilities located on the ground floor which will house health services, expanded office space for Chief Seattle Club, a cafe, and a community gathering space.

In October 2017 a group of neighbors representing residents, organizers, elementary school families, small business owners, entrepreneurs, environmentalists and community-based organizations came together to respond to the threat that displacement places on the fabric of the South Park community by forming the Duwamish Valley Affordable Housing Coalition (DVAHC). The group seeks to develop resident-led strategies to ensure that future development in South Park sustains the economic, ethnic, and cultural diversity of the neighborhood. Capacity building funds will support their efforts to build a stronger more diverse coalition, gain site control for a larger mixed use development project that intends to create 63 units of affordable housing, and support their work to develop a limited equity cooperative affordable home ownership model with the pending purchase of a 4-plex property.

The mission of Ethiopian Community of Seattle (ECS) is to facilitate a seamless integration of all persons of Ethiopian origin into the American system, preserve and share the rich Ethiopian cultural heritage, and contribute to the social, cultural and the economic development of the Puget Sound area. Funding from the Displaced Tenants Fund will support the construction of residential units in the Ethiopian Community Village Project; a mixed-use, six-story facility in the Rainier Beach neighborhood of south Seattle that will create 90 units of affordable senior housing, 45 units of which will be affordable to those making 0-45%.

Gender Justice League’s Mission is to empower trans, non-binary, and gender diverse activists and their allies to combat oppression on the basis of gender and sexuality. Capacity building funds will support the Gender Healing SAFE House (Safety, Access, Freedom, and Empowerment), an ongoing project of Gender Justice League to address the critical shortage of emergency shelter and transitional living resources within King County for trans, non-binary, and gender diverse people. The project’s mission to create a community-accountable temporary emergency shelter, transitional living, and hopefully in the future a small number of permanent low-income permanent housing units.

Ingersoll Gender Center is a trans led organization working for collective self-determination. Together with People of Color Against AIDS Network (POCAAN) and UTOPIA (United Territories of Pacific Islanders’ Alliance), Ingersoll has launched the Transgender Economic Empowerment Coalition. The coalition’s work has identified housing for trans and gender diverse folks who have been previously incarcerated and folks who make less than $25,000 a year as a critical priority. Capacity building funds will support Ingersoll and their partners as they work toward developing a project that can provide such housing through beginning a community led planning and visioning process.

ORIGINS OF THE FUND

In 2013, a private developer bought two affordable housing apartment complexes in north Seattle and began to transform them into market rate units. As eviction proceedings began, many of the low-income tenants in the buildings organized to prevent their displacement with the support of the Tenants Union of Washington. Although the tenants were ultimately unable to stop the evictions, they formed lasting bonds in their activism and created the Displaced Tenants for Accountability and Transparency (DTAT).

DTAT filed a lawsuit against the developer and won a multi-million dollar settlement in 2015. As part of the settlement, the money is designated for supporting affordable housing activities in the city of Seattle. DTAT partnered with SJF to create a Donor Advised Fund with the settlement money now known as the Displaced Tenants Fund for Housing Justice & Affordability.