SJF is thrilled to announce the 9 awardees of the 2020 Forced Migration & Displacement Giving Project (FMDGP)! In October of 2020, the FMDGP cohort came together for the first time: a cross-class, multi-racial, multigenerational group of people, each with personal stakes in the issue at hand. Over the next six months, they worked together to learn and fundraise in their communities — ultimately raising over $200,000!
Forced migration and displacement is a broad issue area with a simple vision: that people should be able to put down roots and thrive where they are at home, without displacing or harming others. Communities build power and wellbeing when their interdependence isn’t interrupted by racism, poverty, and violence. The 9 grassroots organizations selected to receive this grant work toward this vision every day, rooted in the brilliance of the communities they serve. We are proud to support their powerful work! Scroll to read more about each organization and visit their website to support them directly.
We asked two members of the Forced Migration & Displacement Giving Project to share about their experience. Here’s what they had to say:
Ricky Reyes, cohort member 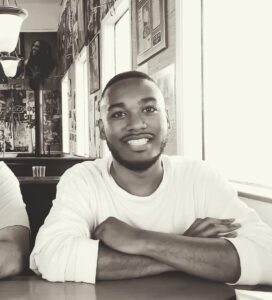 For years I had heard about the transformative work and spaces that Social Justice Fund had built through their giving project model from respected friends, peers, and co-workers. I knew that this was a special space but I lacked the confidence and knowledge around fundraising and asking for money which really scared me. When COVID-19 hit, I witnessed first hand how access to resources was having a direct impact on my community care networks and on my Black and Indigenous neighbors who were being pushed further out of the city.

The Forced Migration and Displacement Giving Project gave me a space to build connections and political awareness with community members cross-racially, cross-class, and cross-gender who were interested and invested in making sure that organizations such as Wa Na Wari, Black Trans Task Force, and the Verde-Coalition could continue to build on their work of making sure that our Black and Indigenous neighbors have autonomy over the spaces and neighborhoods that we have built and stewarded for years.

I am thankful to have had the opportunity to participate and, in the process, learn how to fundraise my community to make sure that anything that happens “about us” is for us and by us. I will take these skills and connections into my work both personally and professionally as we find new ways to envision a future that is resourced and that is for us and by us.

In 2020-2021, I am a Zambian-born and raised Indian, multi-lingual, multi-cultural, cis-gendered, hetero, able-bodied, immigrant woman living alone with my puppy on coastal Indigenous land amidst a pandemic, a racial reckoning, and a strenous economy and democracy, working in philanthropy.

I originally thought I joined the Forced Migration and Displacement cohort because of my lived experiences. It took me roughly 3 seconds to realize that I joined because I needed a political home where I could unpack my relationship to my entire socio-political identity in the U.S., create new approaches to centering Black liberation and Indigenous sovereignty, and show up for our collective liberation with joy, vulnerability, discipline, and humility.

Because of this space, I was able to invite my community to commit their resources to fund our future. I had critical conversations about why we must respond to the call for collective liberation in a deeply personal way, how we can move power, money, and resources while holding the personal impact of capitalism, and trusting that the investments we make in grantees are paving the way for a reimagined future that benefits us all.

I am incredibly grateful for the resources I was able to leverage to contribute to the Giving Project. I am in awe of the cohort’s ability to approach decision-making with trust, thought, and care for our collective interests. And most importantly, I am humbled that the grantees were willing to talk to us about the incredible work they are doing to uplift, support and empower our communities.

While the policy work I engage in accounts for bringing diverse voices to the table, we cannot truly leverage policy advocacy without a radical imagination of our future. I am humbled and excited about the groundwork Wa Na Wari is laying for future policy changes. They build trust within their community, finding ways to engage in research that is led by the community, and are developing a cohesive strategy for Black home ownership in Seattle’s Central District.

Wa Na Wari is reimagining the use of homes to go beyond individual familial and intergenerational wealth. They lay the groundwork for Black homes to be used for community building, art and cultural revitalization, and attending to issues that impact Black communities, opening up policy conversations about housing, land use, affordability, and more. Their approach is brilliant, forward thinking, and demonstrates that community resilience is not just about surviving, but about celebrating people and culture!

We honor the awardees of the 2020 Forced Migration & Displacement Giving Project!

Beyond These Walls | Portland, OR

Beyond These Walls is a trans led organization supporting LGBTQ+ people living in Oregon and Washington prisons. Through case management, advocacy and activism, leadership groups, and their pen pal program, Beyond These Walls works to build community without conditions for LGBTQ+ folks. Their leadership includes people inside and outside of prisons, with the goal of not just reflecting the community they serve, but being an integral part of it.

The Climate Justice Initiative is an Indigenous women-led and focused organization addressing the multifaceted issue of climate change in Indigenous communities and peoples by means of economic and community-led empowerment, the development of strategies and methodologies for mitigating and adapting while preserving cultural heritage and directing their own cultural, social, environmental and economic future.

Fab-5 is a Black-led youth organization that works to ensure that young people in Tacoma and Pierce County are supported to manifest their unique visions for their futures and for the world. At the Fab-5 headquarters, youth can take free weekly classes, create in studio spaces, and take part in workshops and events. Fab-5’s #DesignTheHill project is a cultural and economic reclamation initiative that engages residents of the historic Hilltop neighborhood to build power, assets, and community to prevent displacement.

Latinos Unidos Siempre is a Latinx youth-led organization focused on the educational, cultural, and political development of youth. They work to empower youth to take leadership roles in their communities, to advocate for social and political change, and to combat racism and all other forms of institutional oppression and discrimination through grassroots organizing. They are currently organizing to ensure the City of Salem invests in public and low-income housing, as well as leading efforts to build power and address gentrification and food deserts in Salem’s Northgate neighborhood.

Liberation Medicine School is dedicated to building a decolonial, African-Indigenous, and Black TGNC-led (transgender and gender non-conforming) health system that fosters medical autonomy within the diasporic Afro-LGBTQI+ community. They aim to achieve medical sovereignty by building a school that houses a collective of Black LGBTQI+ medicinists, and centers indigenous medical knowledge, experiences, and narratives of the Black LGBTQI+ community, engages practitioners in undoing pathologic systems of power that undermine the health of Black folks, and upholds the central role of Black TGNC people in anchoring Afro-Indigenous medicine.

Momentum Alliance is a youth-led nonprofit whose mission is to inspire young people to realize their power individually and collectively, and to mentor future social justice leaders. Momentum Alliance works with youth in the Portland Metro region, including Multnomah, Clackamas, Washington, and Clark counties. Through community building, advocacy, and youth leadership, they are currently organizing to prevent displacement of BIPOC communities due to the proposed MAX line in Portland’s Southwest Corridor.

Verde, on behalf of Living Cully | Portland, OR

The Living Cully coalition consists of four nonprofit community development organizations working to improve the quality of life of people of color and low-income people in Northeast Portland’s Cully neighborhood. Living Cully exists to support grassroots community organizing programs led by Cully residents who are vulnerable to displacement, with the goal of building long-term stability and resisting gentrification. Cully resident organizing has resulted in the creation and preservation of thousands of units of affordable housing, a public park, and an upcoming Native arts gallery. Living Cully is currently working to implement a first-in-the-nation community-led development district, where Cully residents will play a lead role in investing tens of millions of dollars to strengthen their neighborhood and prevent displacement.