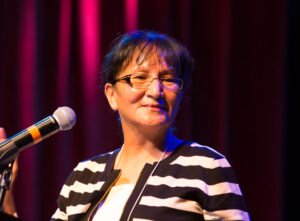 The SJF community mourns the loss of Michaelynn Hawk, an extraordinary community organizer and Native leader from Montana, who passed away on February 3 at the age of 61.

Michaelynn was an enrolled member of the Crow tribe. She was the long-time Executive Director of the organization Indian People’s Action (IPA) which worked to empower Indian families to address the economic, racial and environmental inequities in Montana’s reservations and border towns.

IPA was awarded their first SJF grant in 2011 and went on to receive many more grants over the past decade. As the ED of IPA Michaelynn was often in community with SJF members – be it on site visits, through our Grantee Summit, or at other events.

Said former SJF Executive Director Mijo Lee, “I knew her as a fierce, unwavering fighter for her people. Through her honest feedback about how we could better understand, build relationships with, and truly support Native organizers, she helped SJF become a better funder. I personally learned so much from her about Native organizing and was inspired by her again and again.”

In 2015 Michaelynn received the Jeannette Rankin award at Social Justice Fund’s Annual Dinner for her “longtime activism and extraordinary service in the SJF region of Idaho, Montana, Wyoming, Oregon and Washington.”

In recent years Michaelynn continued to bring attention to the impacts of the criminal justice system on Native communities, and fought on behalf of Native plaintiffs for equal access to voting. She also advocated in the Montana legislature around a variety of issues, including clean energy. She ran the First Peoples’ Market in Butte from its inception (as part of the Montana Folk Festival), and helped found the youth leadership program Native Youth Art in Action (NYAA).

She had six sons, one of whom (Donavon) became a Montana state legislator last year. He credits his mom as a huge inspiration in his own journey as an activist and politician.

Michaelynn loved Montana and her Butte community, loved being part of the fight for justice in Native communities, and loved working on behalf of youth. We mourn her loss and celebrate her organizing and dedication to building a better world.

Her family asks for donations in her honor to be made to the Butte YMCA.