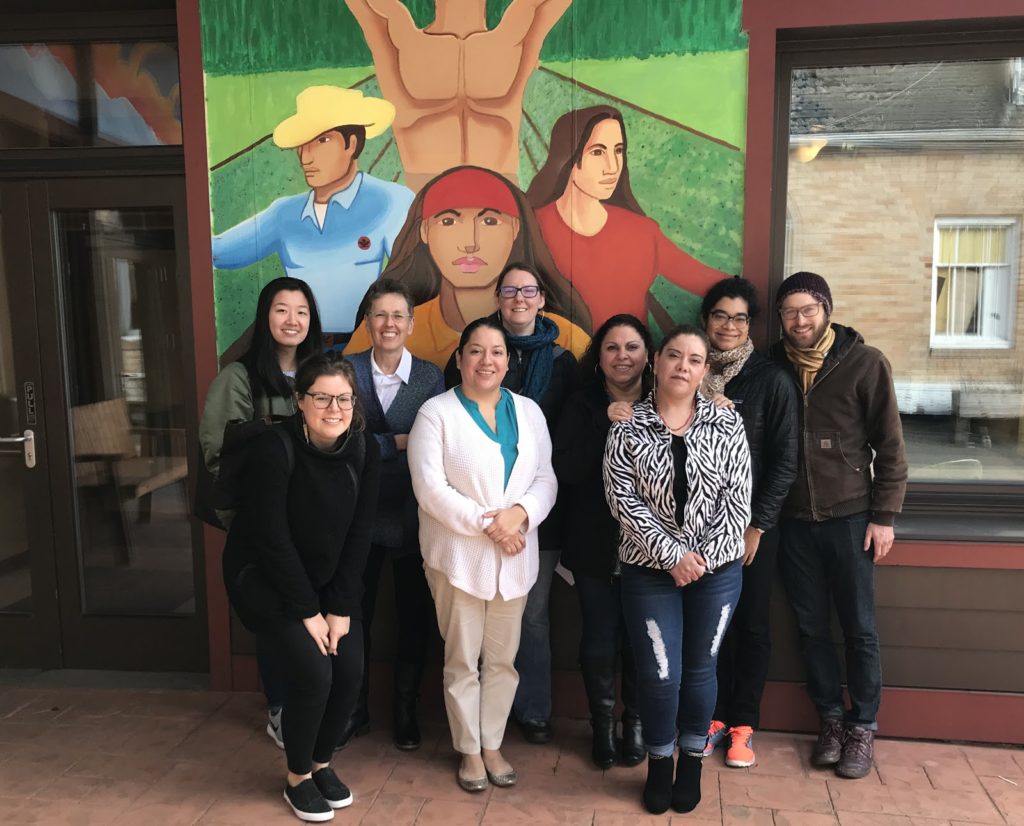 Members of the Immigration Justice Giving Project with leaders of Mujeres Luchadores Progresistas.

MLP recently received a grant from the Immigration Justice Giving Project, but as a potential grantee for our Immigration and Economic Justice Giving projects, we were conducting a site visit to learn more about the organization. SJF site visits typically consist of a basic question and answer format, allowing us to get valuable information to bring back to the rest of the Giving Project for the decision-making process.

When we arrived, we were greeted by Rebeca, the Executive Director, Elisa, who assists with translation and interpretation, and Illia and Margarita who are members of the organization. Between them there was more than 20 years of experience.

Mujeres Luchadoras Progresistas works to offer political education and advocacy for women, especially in the immigrant community. They address immigrant rights, offer domestic violence help, and advocate for policy change that affects women in their community on an institutional level. In the past, MLP offered sessions in their space, but they realized it created burdens for a lot of the people they serve. Due to documentation status and other fears, many women were hesitant to drive; some struggled with childcare; and many were too focused on more immediate needs to take the time out to attend.  Being led by the people they serve, they were able to make a change that addressed the accessibility issue and started having women in the community host sessions in their own homes.

The shift to house visits not only gave the women more accessibility and security, it also empowered them. Women who hosted house visits developed a sense of leadership and validation. MLP sees it as a way of buying in. They frame the house visits as a product they are selling (for free). They offer women a chance to get their friends and family together to share the product, much like a Tupperware party. In addition to spreading the education and resources, it becomes a way to build and strengthen community.

Some of the women hosting our team shared stories of how the work has impacted their personal lives. One woman is as a domestic violence survivor who was able to leave her abuser with help from MLP. Before coming to meetings, she had been anti-social because of the abuse. She described feeling isolated and hopeless. The education and support she received was quite literally life-changing. Now, she considers herself a community leader and takes great pride in helping women in similar situations. The women are very passionate about the work they do because they empathize with the people they serve. Because they are the people they serve.

Mujeres Luchadoras Progresistas also has a radio program. Through this platform, they can reach even more women in the community who are unaware of or unable to attend house visits. Women have called or written in to thank MLP for the program and how it has touched them personally.

Our hosts wrapped up our visit by introducing us to their Wreath Project. Every winter, MLP brings women together to make holiday wreaths to raise money. The wreaths are distributed as far as Seattle, where they have partnered with Grand Central Bakery as a pick-up location. Each wreath features a colored ribbon that connects it to the women who made it. The Wreath Project has been a big funding source and good way to get word out about the organization to the larger community.

After visiting Woodburn our team left feeling excited about the work being done. The love and respect MLP leaders have for their community really stuck with us and we look forward to the work they will be able to do as the organization grows.